An example of  the inability of the  printed Talmuds to portray the diagrams of Rambam and Rashi, as found in the manuscripts.

I would like to focus on the Yesod  of the Mizbeach, whose dimensions are discussed at the beginning of the Mishnah  Middot 3:1 and again at the very end. The beginning of the Mishnah) states as follows:
המזבח היה שלושים ושתיים, על שלושים ושתיים.  עלה אמה וכנס אמה, זה היסוד
This describes the Yesod being thirty two Amot square by one Amah high.
However the end of the Mishnah adds the following qualification
היסוד היה מהלך על פני כל הצפון, ועל פני כל המערב; ואוכל בדרום אמה אחת, ובמזרח אמה אחת
This states that the Yesod did not encompass the entire base of the Mizbeach, rather it only ran along the northern and western sides of the Mizbeach . It then “ate” one Amah of the southern and eastern sides.  What that means, and how it looked is the subject of this article. We will also delve into how the rendering of the illustrative diagrams changed through the ages.
The Gemara in Zevachim 53B discusses the 4th Mishnah of the Perek”. It begins as follows
העולה קדשי קדשים שחיטתה בצפון וקיבול דמה בכלי שרת בצפון ודמה טעון שתי מתנות שהן ארבע
“The Olah is ‘Kodesh Kodashim’….and its blood requires two applications which are (like) four”.
During the ensuing discussion, it emerges that the blood is applied in two corners which are diagonal to each other, and they are the northeastern and southwestern corners. The reason it could only be these two corners is because the southeastern side did not have the Yesod. The Gemara then states:
עולה טעונה יסוד וקרן מזרחית דרומית לא היה לה יסוד מ"ט אמר ר' אלעזר לפי שלא היתה בחלקו של טורף דאמר רב שמואל בר רב יצחק מזבח אוכל בחלקו של יהודה אמה
The Olah requires a Yesod, and the southeastern corner did not have a Yesod…why is this? Rav Elazar says because it was not in the portion of Toref ( Binyamin), as Rav Shmuel Bar Rav Yiztchak stated ‘The Mizbeach “ate” one Amah in the portion of Yehudah’

We again have this concept of an Amah being “eaten” on a side of the Mizbeach, and we will now study the three main opinions as to what that means,

The best summary of these opinions and their sources can be found on the website of Shimon Wolf.   (www.swdaf.com , and are being used with permission.) 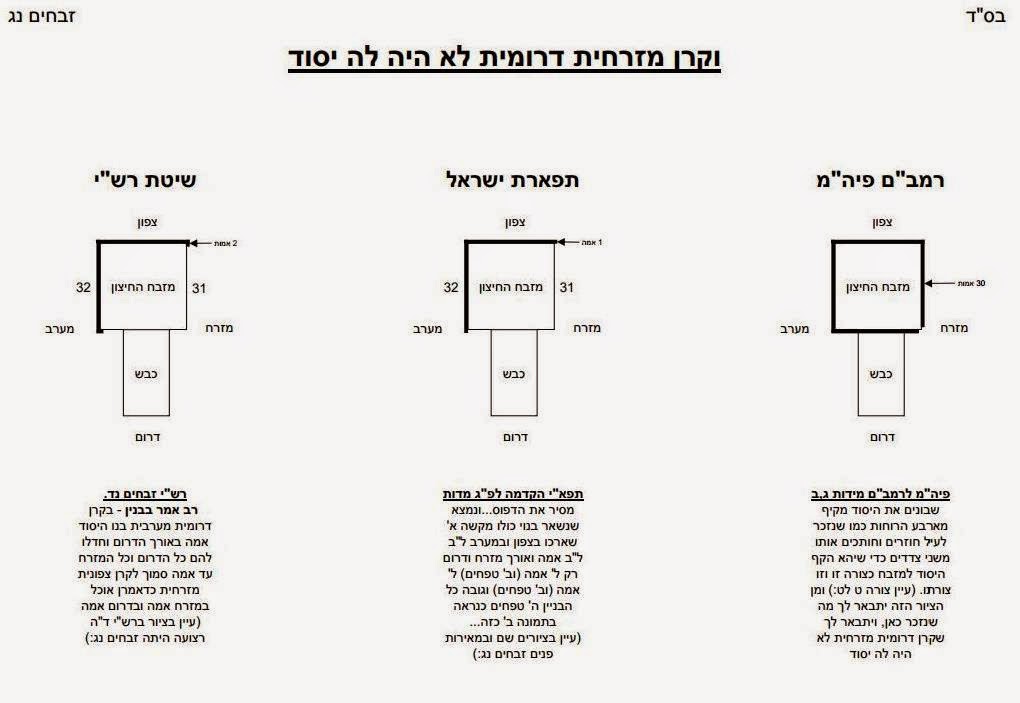 The Rambam’s opinion is that the Yesod encompassed almost all four sides of the Mizbeach except for one Amah on each side of the southeastern corner. The Rambam states his opinion in Midot 3:2. Curiously he does not state it in Midot 3:1 which most fully describes the Mizbeach and where the concept of two sides 'eating' into the southern and eastern side is mentioned. What I also find most interesting is that the Rambam does not use a lot of words to explain his opinion but rather relies very heavily on the diagram that is part of his commentary.
Here's Rambam's sketch, drawn in his own hands (Oxford Bodleian Library MS Poc. 295) 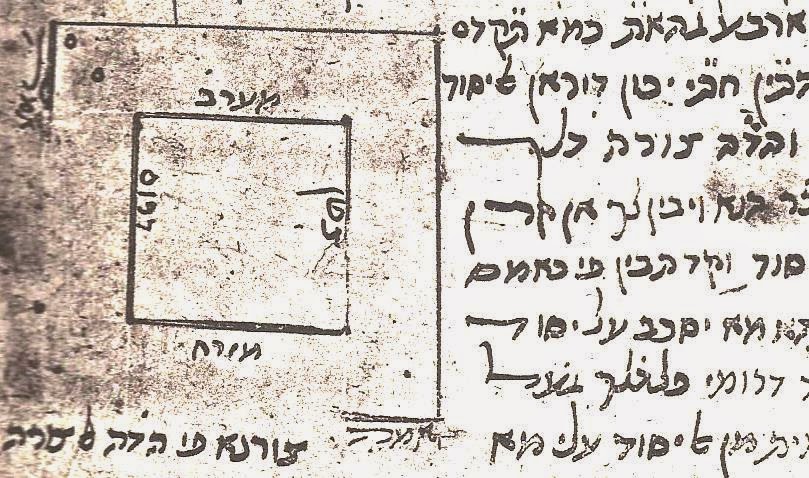 This is from the first printed Peirush Mishnayot HaRambam printed in Napoli in 1492 which was  transcribed from an unknown manuscript which contained a diagram. 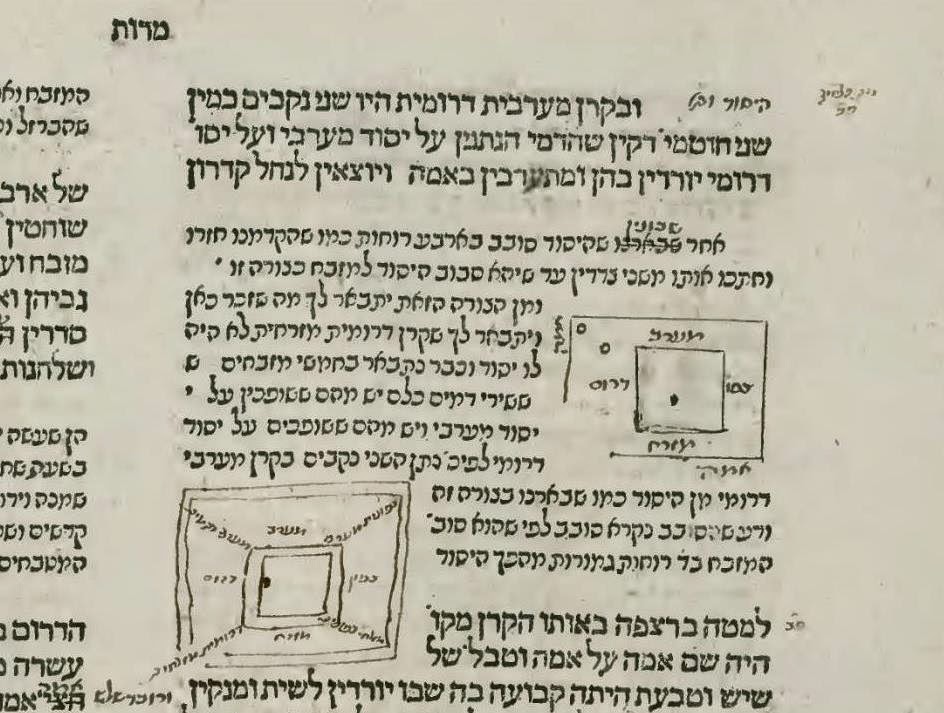 The Rambam states as follows “After they built the Yesod  around all four sides of the Mizbeach )(or after we have explained that the Yesod  encompassed all four sides of the Mizbeach )as we have explained, they cut two sides until the Yesod encompassed the Mizbeach like this diagram…and from this diagram you can see what is mentioned here.” Nowhere does the Rambam state that only one Amah was left without a Yesod on either side of the southeastern corner.  He only points us to the diagram to understand what he is saying. The diagram seems to indicate that there was an Amah on the south and eastern side, but it wasn’t the part that was missing the Yesod.
The Mantova edition of Kodshim printed in 5422 (1562) does a much better job of illustrating the Amah that was missing from the Yesod on the south and eastern sides. 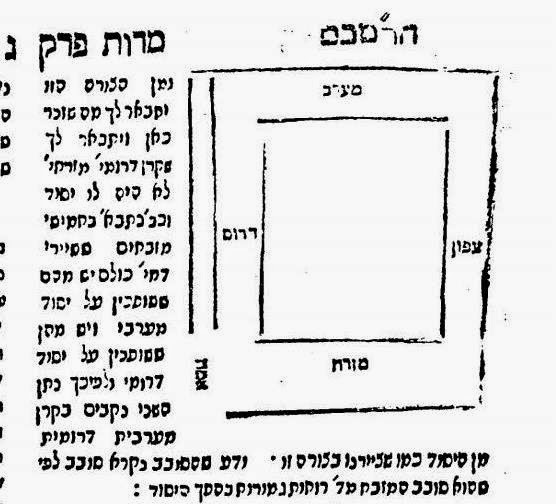 I think this proves again how important it is for a diagram to be accurate because understanding the Rambam’s opinion relies mostly on the diagram.

The opinion of the Tiferet Yisrael is stated and illustrated as a preface to his explanation of the third Perek of Midot. He states that after first constructing the Yesod all around the Mizbeach, you take away all of the southern and eastern side and it ends up looking like this: 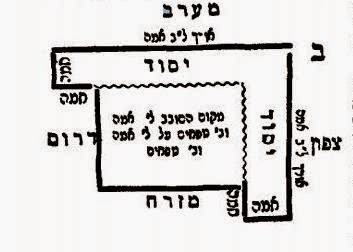 You can see that his opinion is that the one Amah addition to the southern and eastern sides did not wrap around those sides but rather was a one Amah extension of the northern and western sides.

We now get to Rashi’s opinion which is explained and illustrated in Zevachim 53b.
What is clear from the words of Rashi, and especially from the diagram, is that the Yesod was complete only on the northern and western sections of the Mizbeach. It then “wrapped around” the eastern and southern sides for one Amah. In this way, three corners of the Mizbeach had the Yesod underneath them. The text of the Rashi is as follows.

In the standard edition of the Vilna Shas, the Rashi is accompanied by this diagram which Rashi refers to as “כזה” 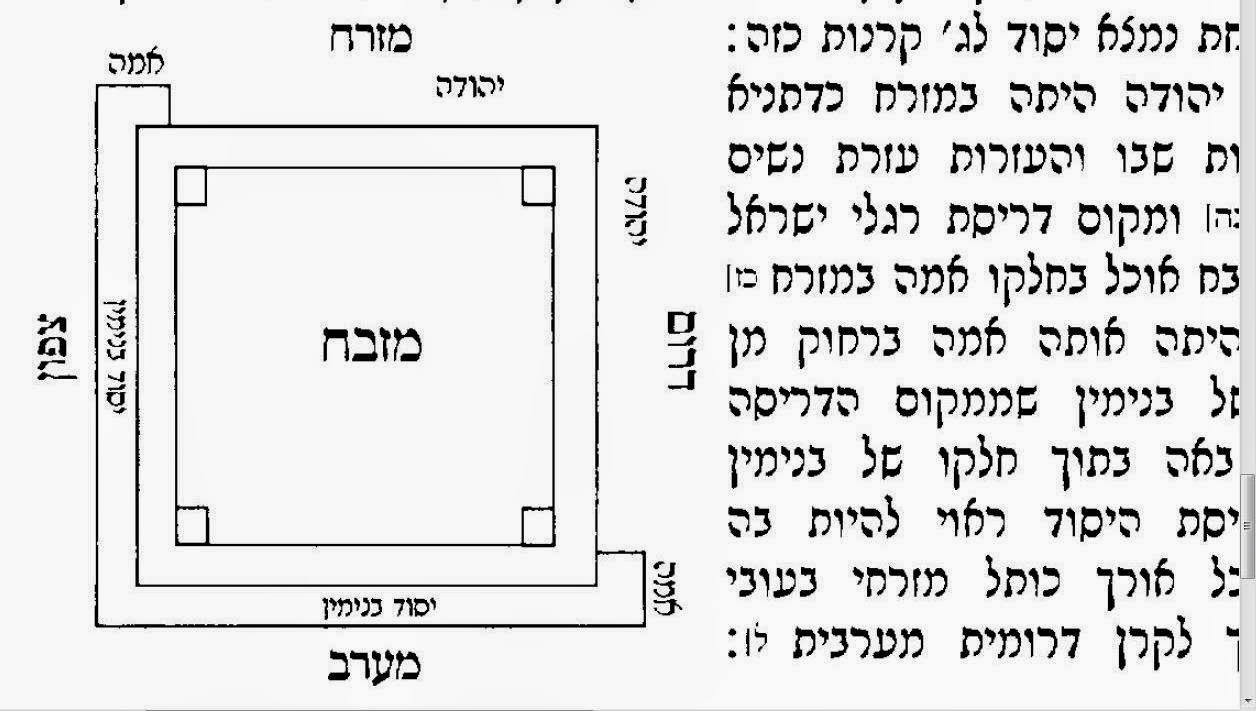 The diagram in this manuscript is incorrect in portraying Rashi’s Shita.  Rashi clearly states that the western and northern segments of the  Yesod wrap around the southern and eastern side one Amah in length. In this diagram, the northern and western sides of the Yesod extend in a straight line one Amah and do not wrap around the southern and eastern side. (This is actually the Shita of the Tiferes Yisroel )
Here is the diagram in the manuscript from the Paris- Bibliotheque Nationale Heb.  325

This is correct as it shows the Yesod wrapping around the southern and eastern sides. Neither diagram is drawn to scale, but at least in both diagrams, we get the schematic picture. 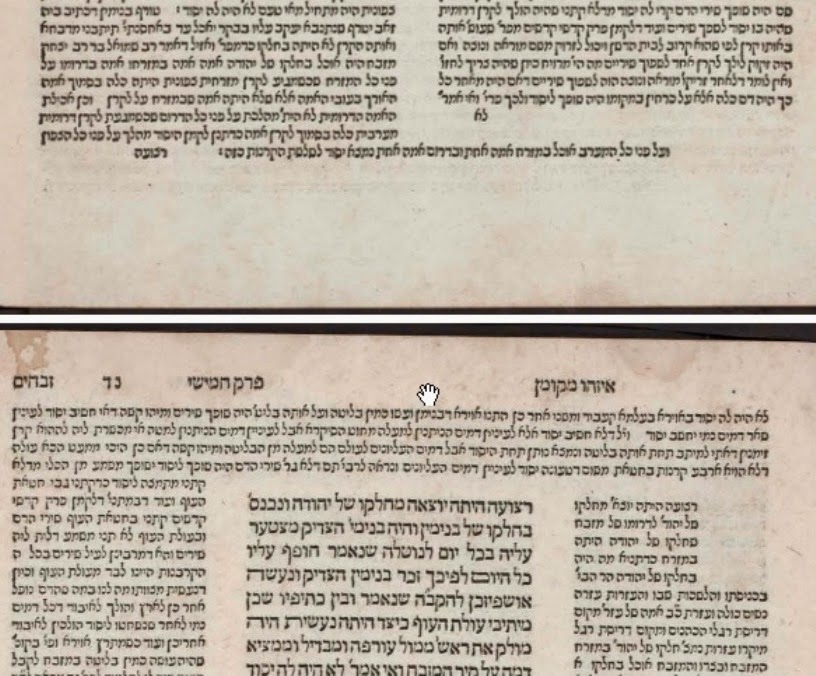 Although the Berman Frankfurt on Oder Shas of circa 1698 was the first printed edition to include most diagrams, it did not include one for Zevachim 53B.
The first printed diagram I could find was from Frankfurt Am Main from 1720. It looks like this

From then on the diagram did not change in subsequent editions of the Talmud and is basically the same in the classic Vilna Shas.