The Dome of the Treasure: Recent findings in the Damascus Genizah 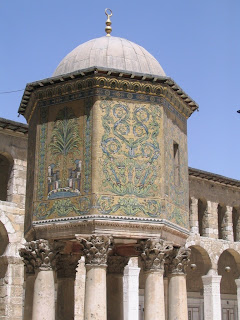 We recently came across a publication mentioning early medieval Hebrew manuscript fragments among the Moslem Genizah in the Qubbat al Khasna (Dome of the Treasure) in the Umayyad Mosque in Damascus. This is not new at all, just ignored. They were brought to Berlin over a century ago, photographed and returned. We contacted our colleagues in Berlin, Petra Figeac of the Staatsbibliothek (SBB) and Ronny Vollandt of the Freie Univ., (who spent much research time here in the Machon), who were both most cooperative. Ronny is working on a catalog of the SBB items, which he hopes to publish soon, He describes the history of the collection:

"During his visit to the Holy Land, Kaiser Wilhelm II (1859-1941) was shown the Qubbat Alkhasna and told of manuscript treasures it contained. By diplomatic means he negotiated with the Sublime Port that a German scholar should be dispatched to sift through the material. Bruno Violet was chosen for that purpose.

He spent about a year in Damascus and separated from the large bulk of fragments all texts of a non-Muslim provenance. His collection, consisting mainly of Jewish and Christian texts, was sent to Berlin in order to be photographed and supposedly got lost on the way back. For a long time it was believed that also the photographs got lost during the war, but luckily surfaced again at the Staatsbibliothek a couple of years ago. They are kept today in a folder, Or. Sim. 6, which contains various Semitic languages, Arabic (biblical and scientific texts), Syriac, Christian Palestinian Aramaic (already published by Sokolov and Müller-Kessler), Hebrew, Samaritan (Bible), but also Coptic (Bible), Latin and Old French (a chanson de geste)".


I might add that in Violet's 1902 publication, on a Psalm Translation that he found in the Damascus Genizah, he is aware of the Cairo Genizah (p. 44), but apparently did not think of contacting Schechter, Kauffman or anyone else in Judaic studies, whom would have been elated to discover a sister-genizah and would have noticed immediately the Cairo-Damascus connection. Although his mandate was to photograph all non-Islamic material, Violet was interested in the texts and documents of the early Church. It seems that in the era before academic blogs, scholars were generally unaware of what would be treasures to scholars of other fields. This is what doomed the Damascus Genizah to go unnoticed for a century. I think the Hida would call it סוד עלמא דאתכסיא.

Petra has uploaded the Sim. Or. 6 photo-album on line in SBB's digital library, here.

Petra also turned our attention to a 2011 publication by Dr. Cordula Bandt, her colleague in the Berlin-Brandenburgischen Akademie der Wissenschaften (BBAW). There she mentioned that there are also Hebrew items in her institiution's collection of the Violet photos, and even published some.

This image from Bandt's article is particularly astonishing. We see here 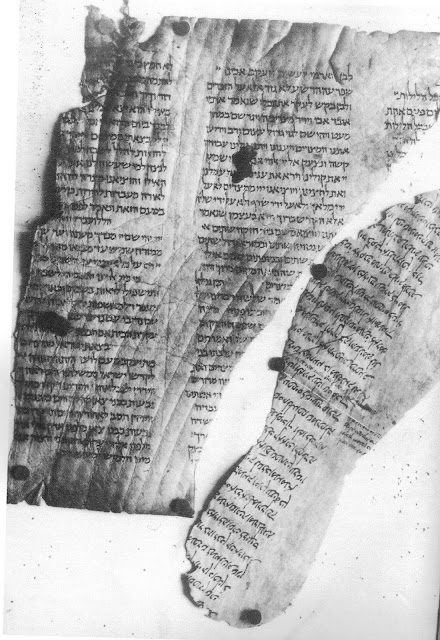 a Hagadda with unusaly early paleographic features, that could easily be 10nth century (thanks to Tamar Leiter of the Hebrew Paleograpy Project). Violet shot only one side, which indicates that this might even be in scroll format, making it even earlier. The devlopment of the מדרש מקרא ביכורים at the core of the Hagaddah has been traced by Jay Rovner (JQR 2000; JQR 2002, ,pp. 421-453, thanks to Yisrael Dubitsky for the citation). Notice at the top of the middle column of the Damascus fragment , the Midrash is virtually non-existant, a minimal fulfillment of the normative Mishnaic obligation ודורש מארמי אובד אבי. This is the Eretz Israeli Hagaddah that R. Natronai Gaon (Tshuvot, ed. Y Brody, Ofeq, 1994 fol. 257, no. 138) was describing and criticising, as its confrontation with the Mishnaic ordinance smacks of Karaism. (Thanks to R. YM Dubovick). In the very same frame, Violet includes a fragment of Rashi on Bavli Sukkah 16, in a writing with features of 14nth cent. Spain/Provence. This image is enough to disclose that the Damascus Genizah spans the same era as its sister in Cairo.

Consistent with the bibliographic phenomenon of סוד מילתא דאתכסיא, when the time comes, things flow easily. Cordula just happened to be visiting in Jerusalem this week and dropped by with a CD of the BBAW Violet photos. She also explained, as in her article, that Violet photographed only about a third of the non-Islamic items that he collected, before the Genizah was returned to Ottoman foreign office in July 1909. That's the last anyone saw of it. She suggests (p. 16) the possibilty of the Topkapi Museum in Istanbul. The number of Hebrew fragments in the Violet collection amounts to around 170.

Here's a handlist of the Sim Or. 6 folder of the SBB, that we have just cataloged in NLI's Aleph online catalog:

1. R. Sa'adia Gaon's commentary on Vayikra XVI (identified by E. Ben-Porat). A bipholio that includes an article on the Qtoret (XVI 13), and another on the Goralot (XVI 21-22). The first four lines of the latter are identical with the last four lines of JTS ENA 3172.9 from the "other" Genizah. NLI Aleph record here.

2. The beginning of a Judeo-Arabic poem on the Decalogue. The features are similar, but not identical, to the three copies of such a poem in the Stasbourg collection of the Cairo Genizah 4028/15 (in all three the beginning is missing). Here.

3. Seven folios of magical recipes, instructions and angelic formulae for various purposes, including for opening ones heart to absorb Torah study. Gideon Bohak and Moshe Morgenstern are collaborating on this, as it is significant not only in the study of magic, but in the study of Babylonian Jewish Aramaic as well. Here. Ginzei Qedem 10 (2014), English section pp. 9-44. Gideon Bohak's transcript Here.

4. Two small folios of Mishnah Glossary of the Tafsir alFat AlMishnah type. The words defined here are from mShabbat 1-2, but in an uncanny way, contain none of the words defined in the parallel Tafsir, in Oxford Bodley 2668.1, from Cairo. With one exception- the word לבקרו (mShabbat 1:4), in which the definition has been erased. Could this be a supplement to the Cairo fragment? Here.

5. A Ketubbah composed in the Court of the Eretz Israeli Gaon, Mazliah [ben Eliahu ben Evyatar) HaKohen who is well known from the "other" Genizah. dated 1129. This will be published by Amir Ashur in Peamim. This item has particular halakhic significance, as the bride is a divorced virgin (from Erusin). Here.

7. A deed of Real Estate Acquisition , composed in Tyre in Hebrew Year [..]160 (=31.1.1100?). Here. If the date is correct, this is soon after Tyre absorbed refugees from Jerusalem, sacked in the First Crusade. 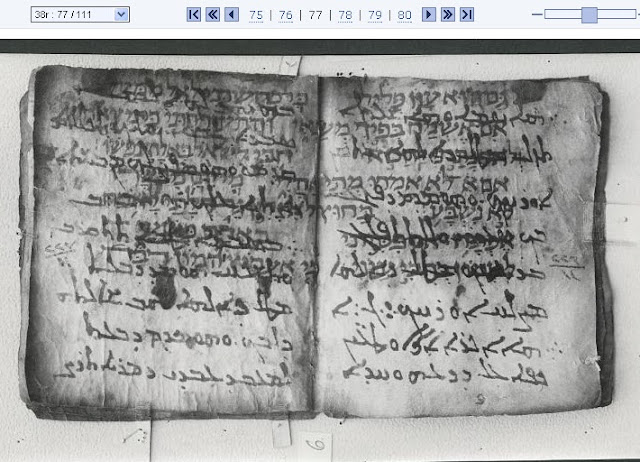 13/1/14 Arianna D'ottone, has sent me her most recent publication on the history and findings  of the Damascus Geniza. Arianna has been publishing articles about this topic in Italian academic journals since 2007,  with  Prof. Paolo Radiciotti who has been searching fragments of  Patrisitc Literature there . There is much information here that could suplement what I have presented here so far. For example, on p. 72: The Hebrew and Samaritan manuscripts are an important component of the find. They are mainly sacred texts —Old Testament, liturgical and synagogal— but there are also Jewish marriage contracts".

6.18 D'ottone and Vollandt, along with Konrad Hirschler organized this conference in Berlin on the subject.